Previous Cars: All V8, all American muscle. I had a WRX for about 3 months before I traded it to a Durango. We also had several motorbikes here and there that scratched the itch for speed and fun.

Then Covid hit, life got… well, a little interesting for a while, and I decided to pull the trigger on my first BMW, the 2021 M440 xDrive. You can see my thread on delivery here.

I went to a few meets and got bitten by a G82 bug. The hook is set. Then my sales person from the dealership called and said it was cancelled, and would I like to customize? No pressure, no deposit, just give him a build code and he’ll order the car. If I didn’t want it in, I didn’t have to worry they’d throw it in the lot.

Alas, in the time between demand and arrival, the market fell and went back to normal, but by then… well, by then I had already run the numbers in my head enough to imagine I could make it work regardless. Last week my car finally arrived, I picked up my car on 11-11-22 with 11 miles on the odometer. 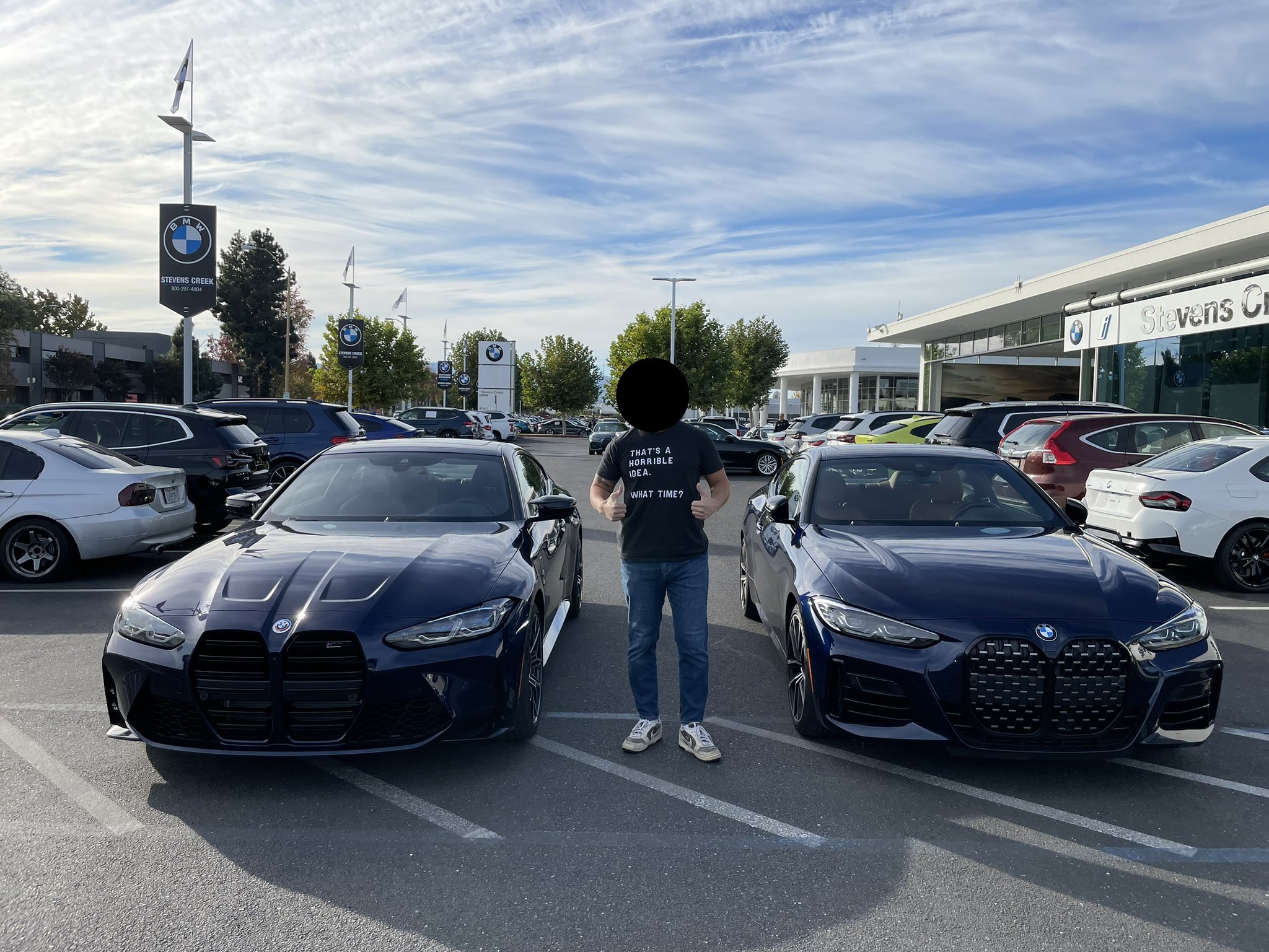 Funny story – while I was at the dealership, another random client saw my shirt and loved it, so he came over to talk and asked me where I got it and what I was here for. As it just happened, was there to look at another 2021 M440 CPO they had in the lot, but they were distracted by me and drooling when I was inside. He offered to make a deal right then and there, but unfortunately we couldn’t get his bank or anything due to the holiday, so I took the dealer’s deal. It ended up being about 6 in one hand, and half a dozen in the other anyway, so not much of a difference to me. Maybe $40/month on payments.

Anyway, I digress. More photos! Here are some side-by-side comparison shots of the M440 and M4CX from the parking lot. I apologize for the camera quality, I just used my iPhone. Also excuse me for the water and dirt stains – it had been raining for the days before I picked up the car, and the car was sitting on the roof of the parking garage, and I asked the dealership not to touch it because it was going straight to the detail shop for the PPF and they were going to do a full paint patch anyway. 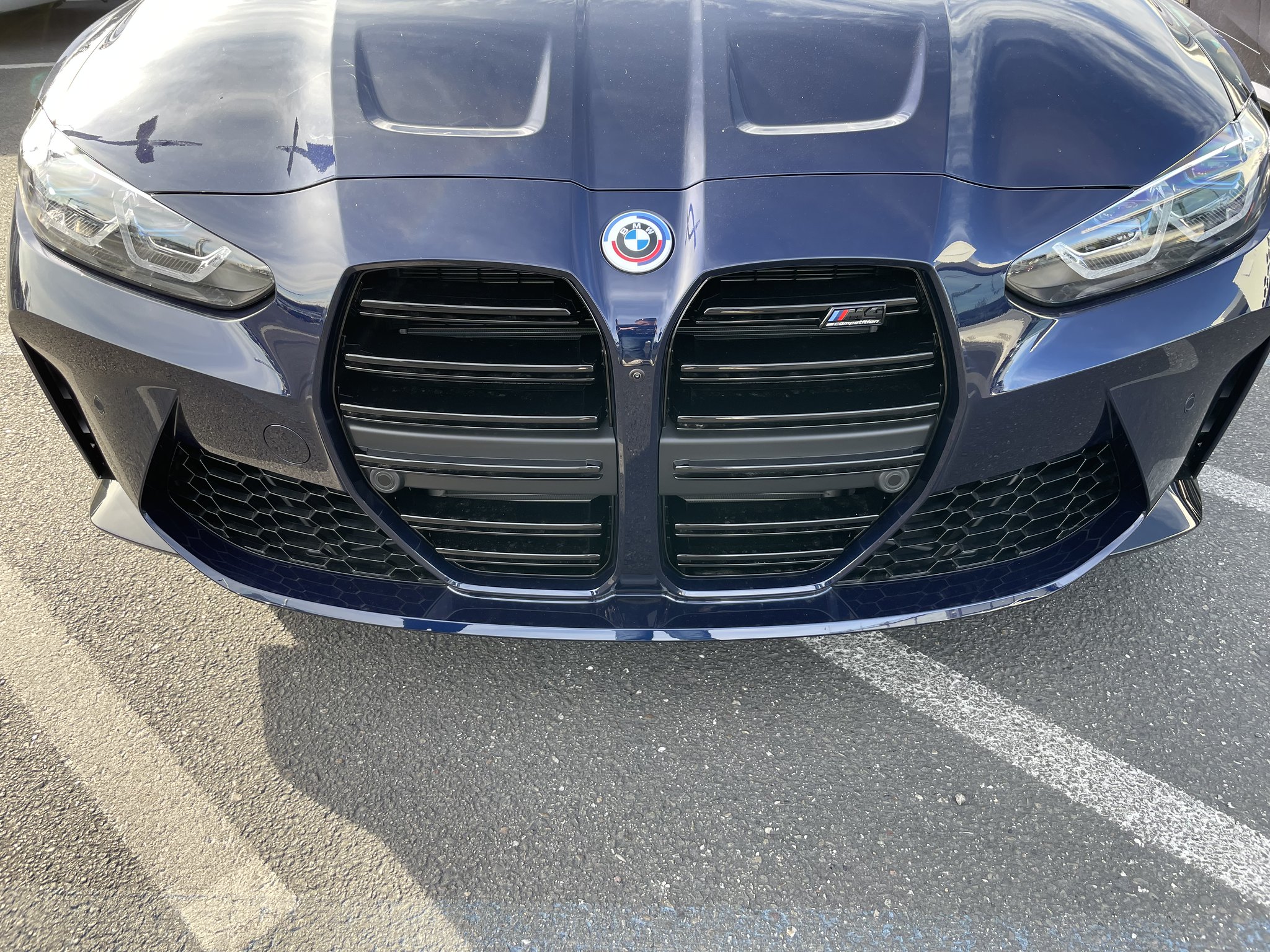 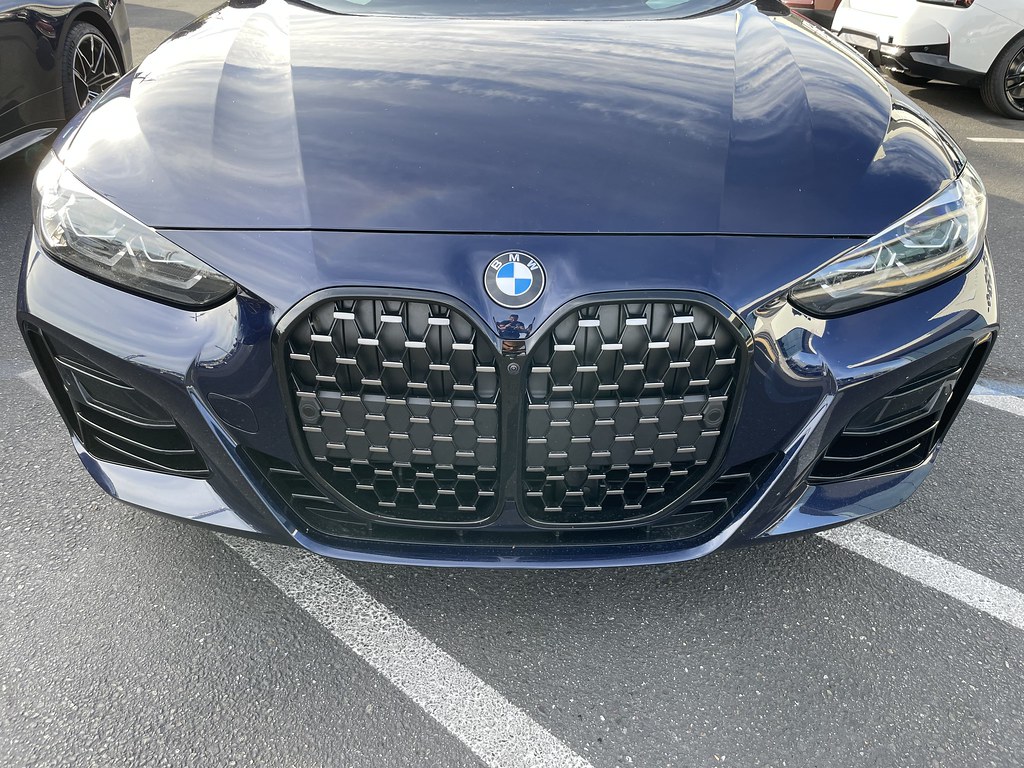 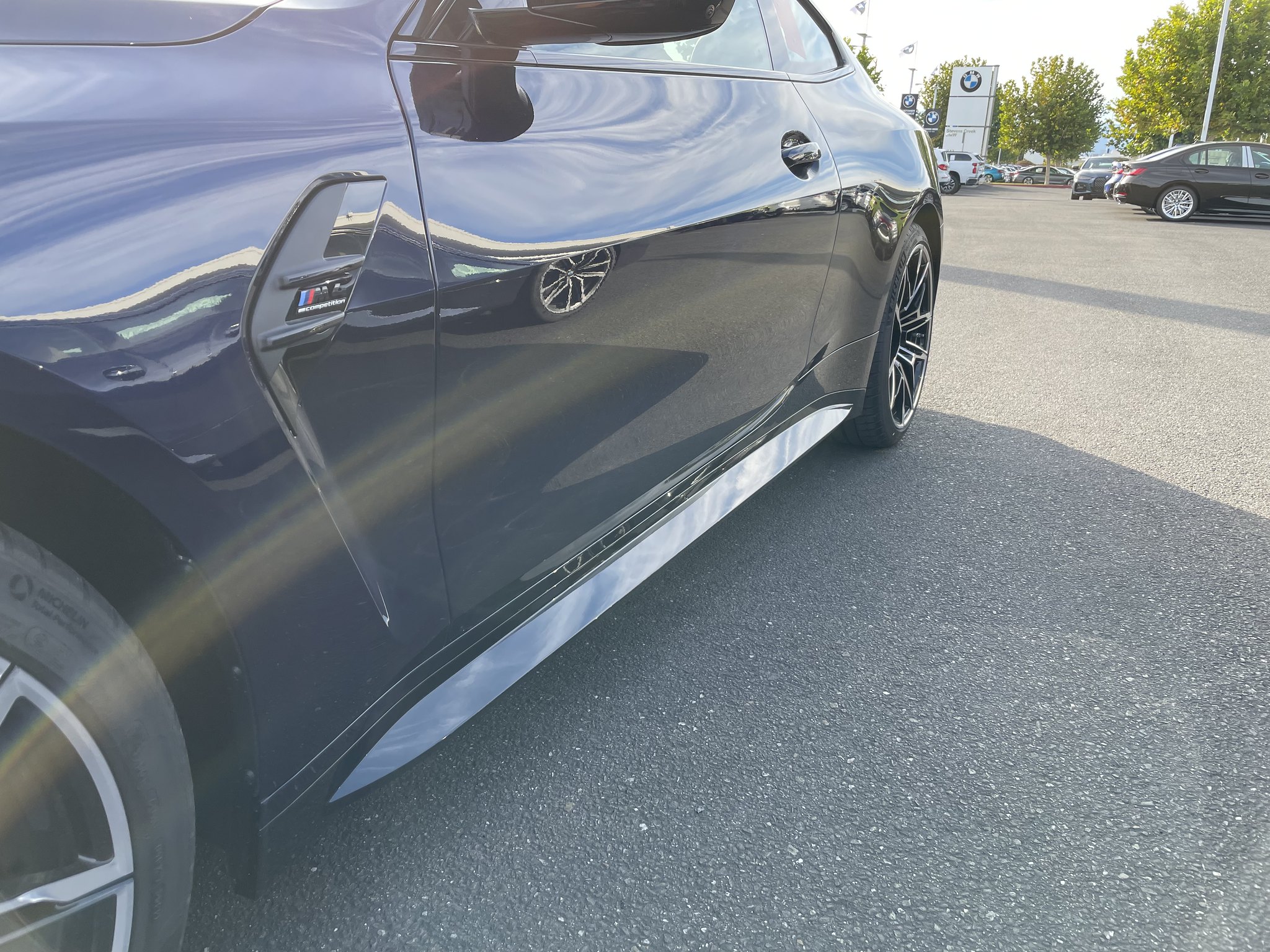 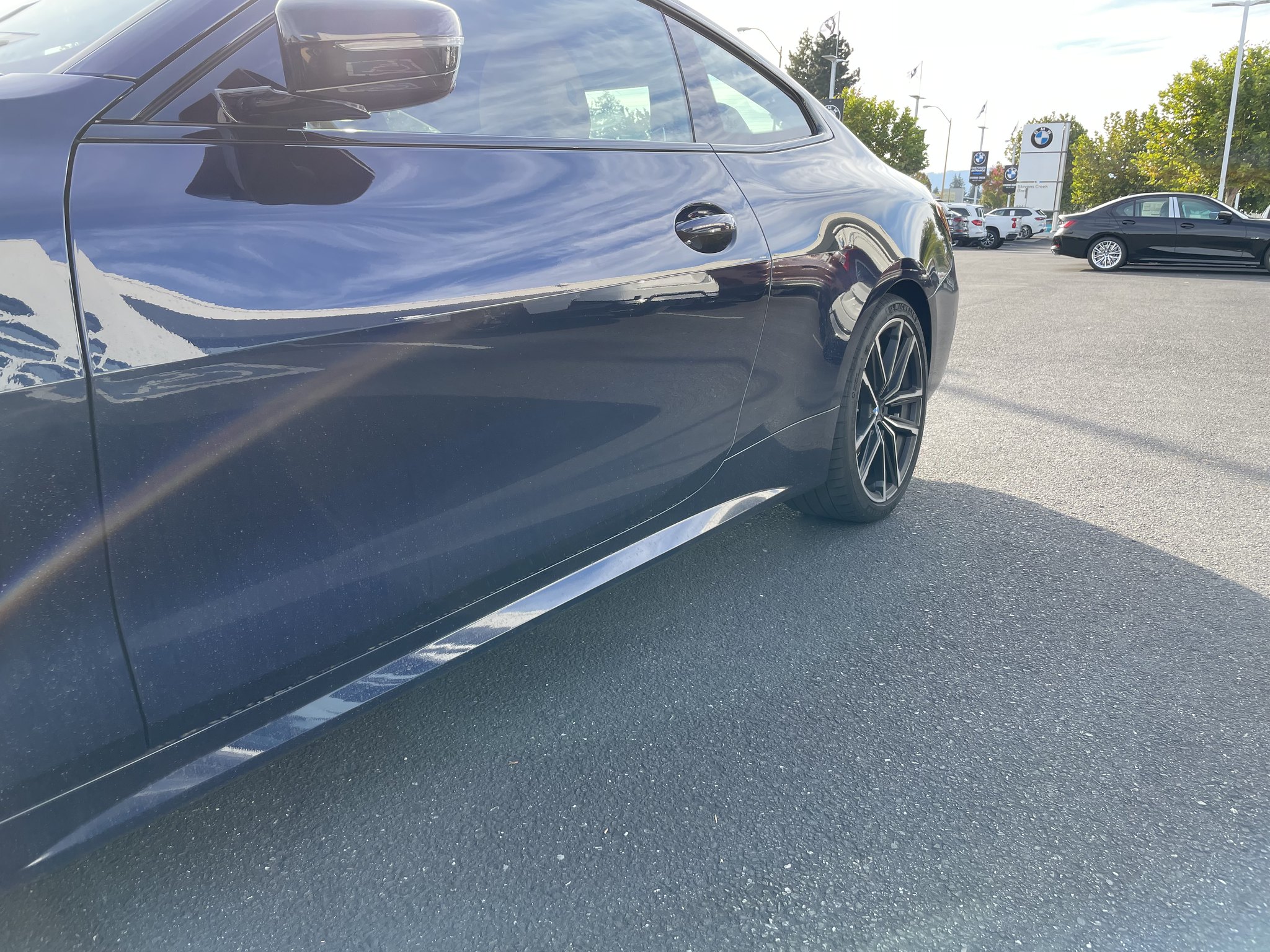 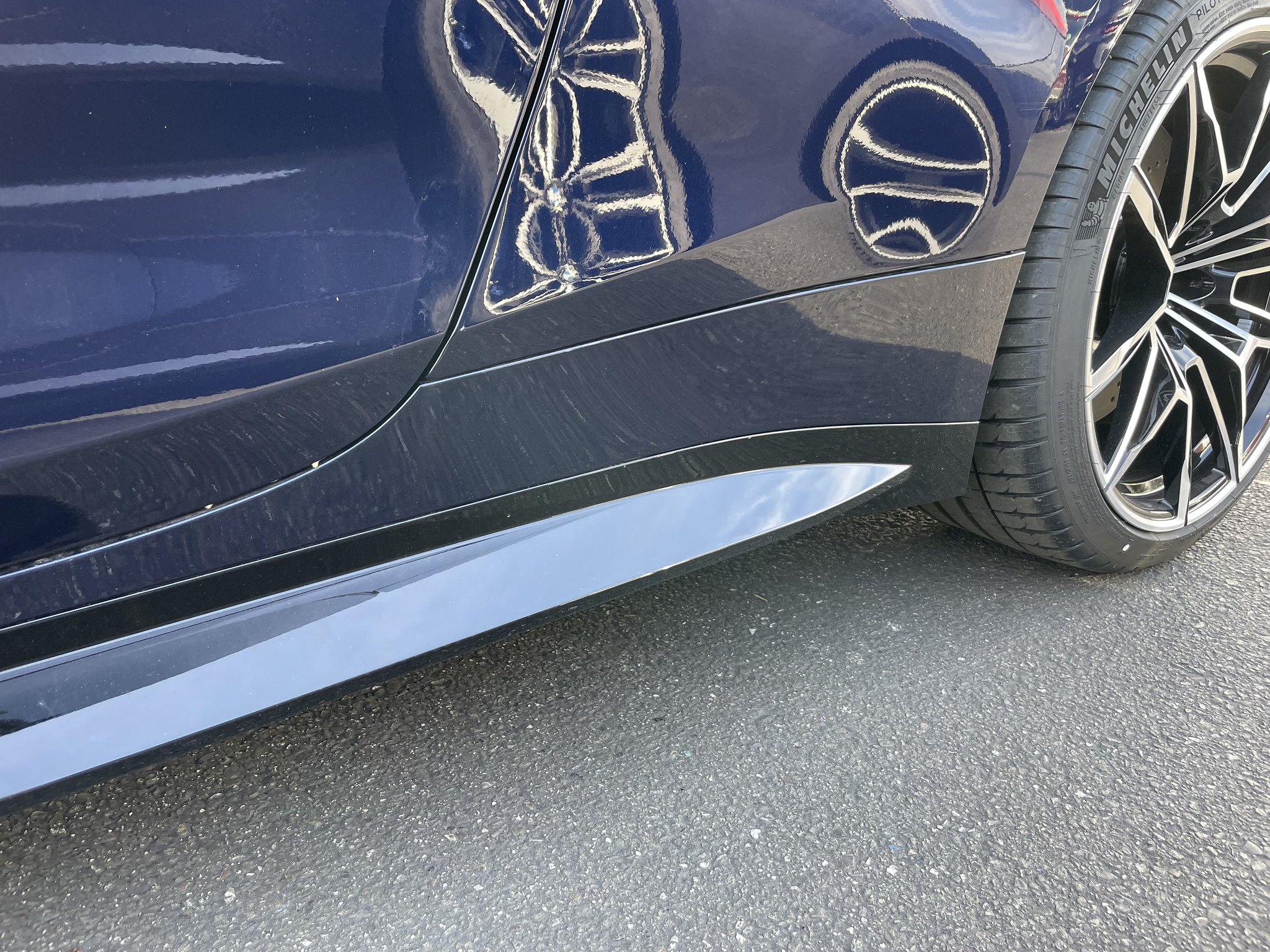 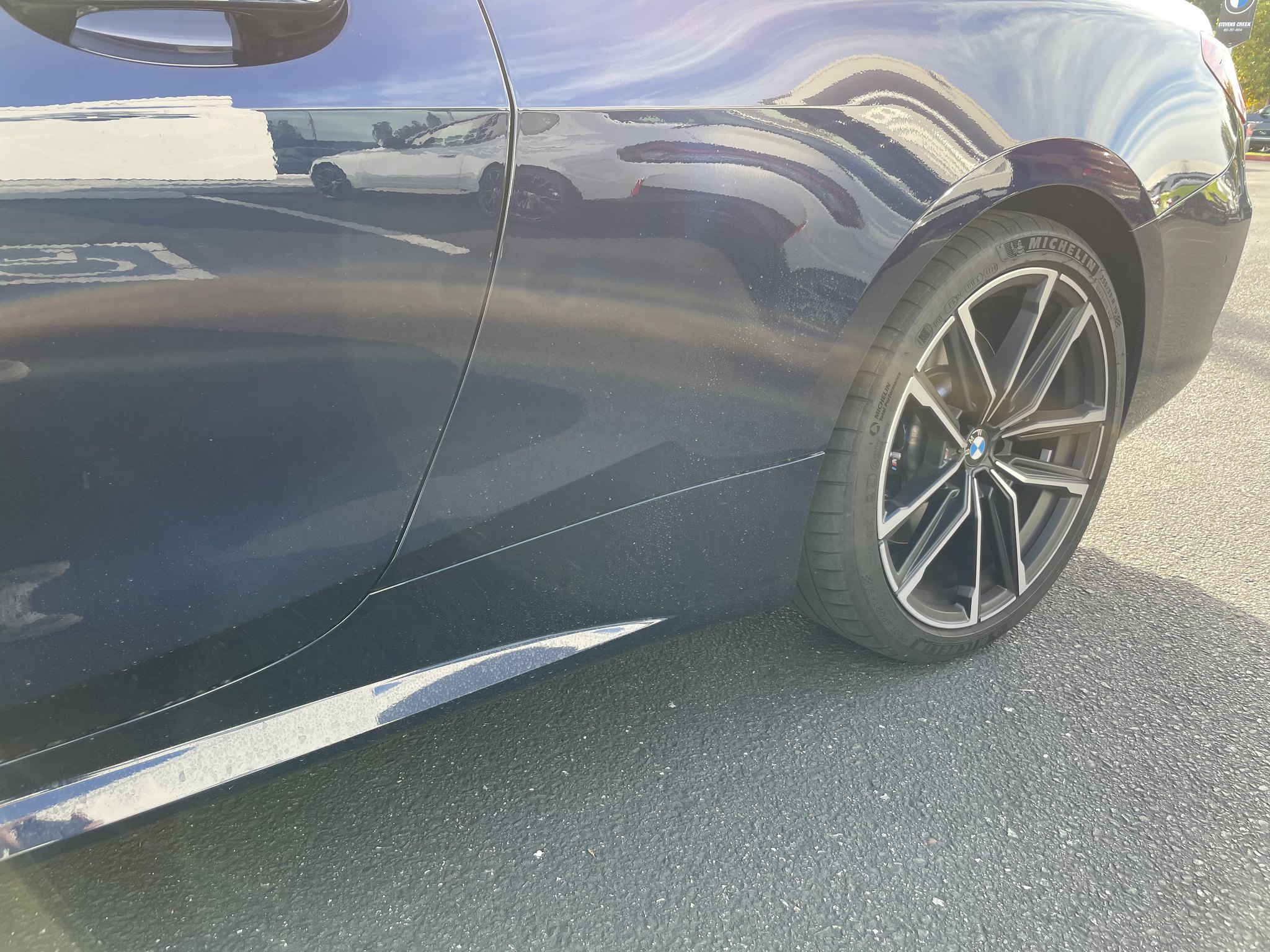 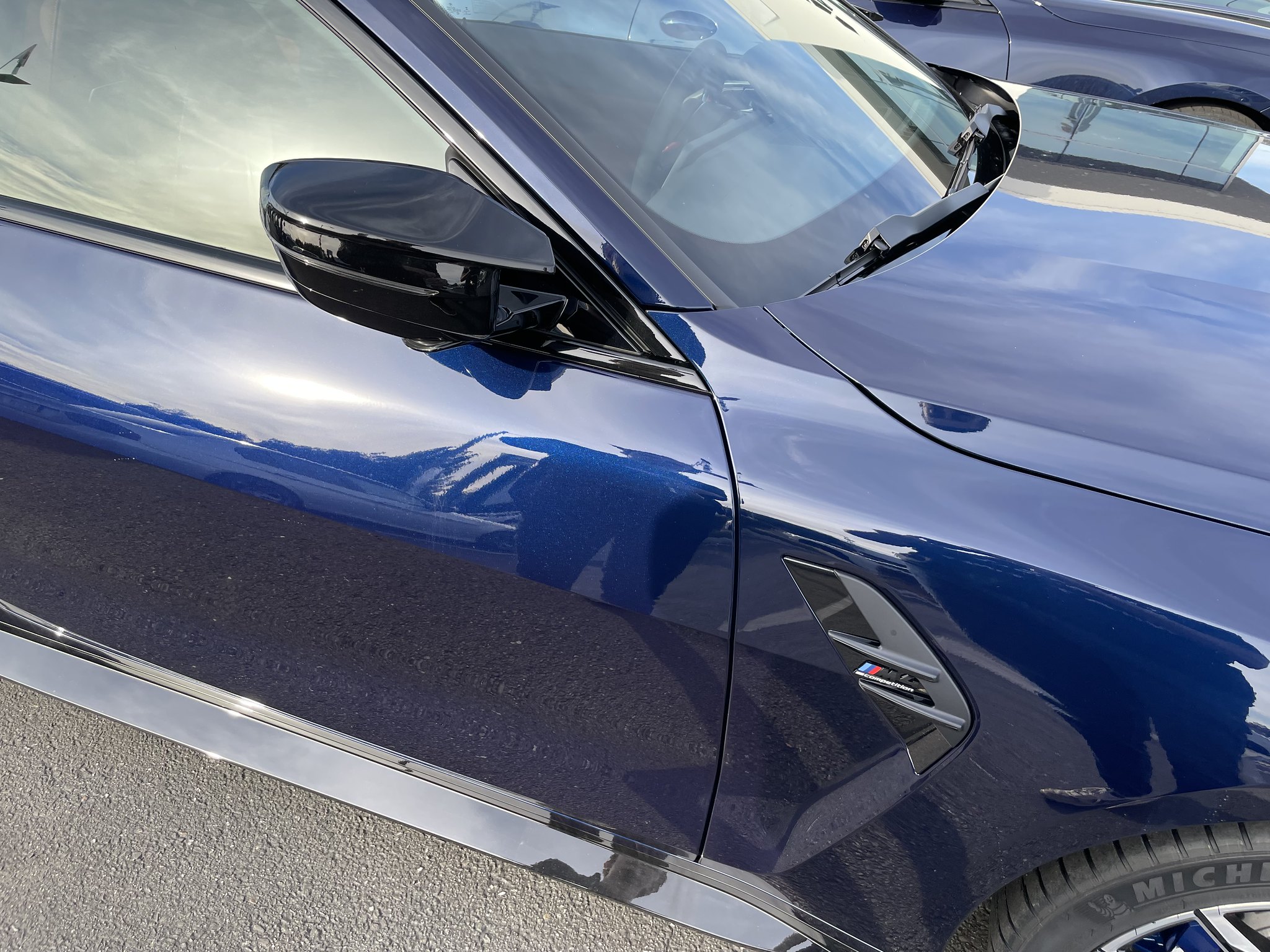 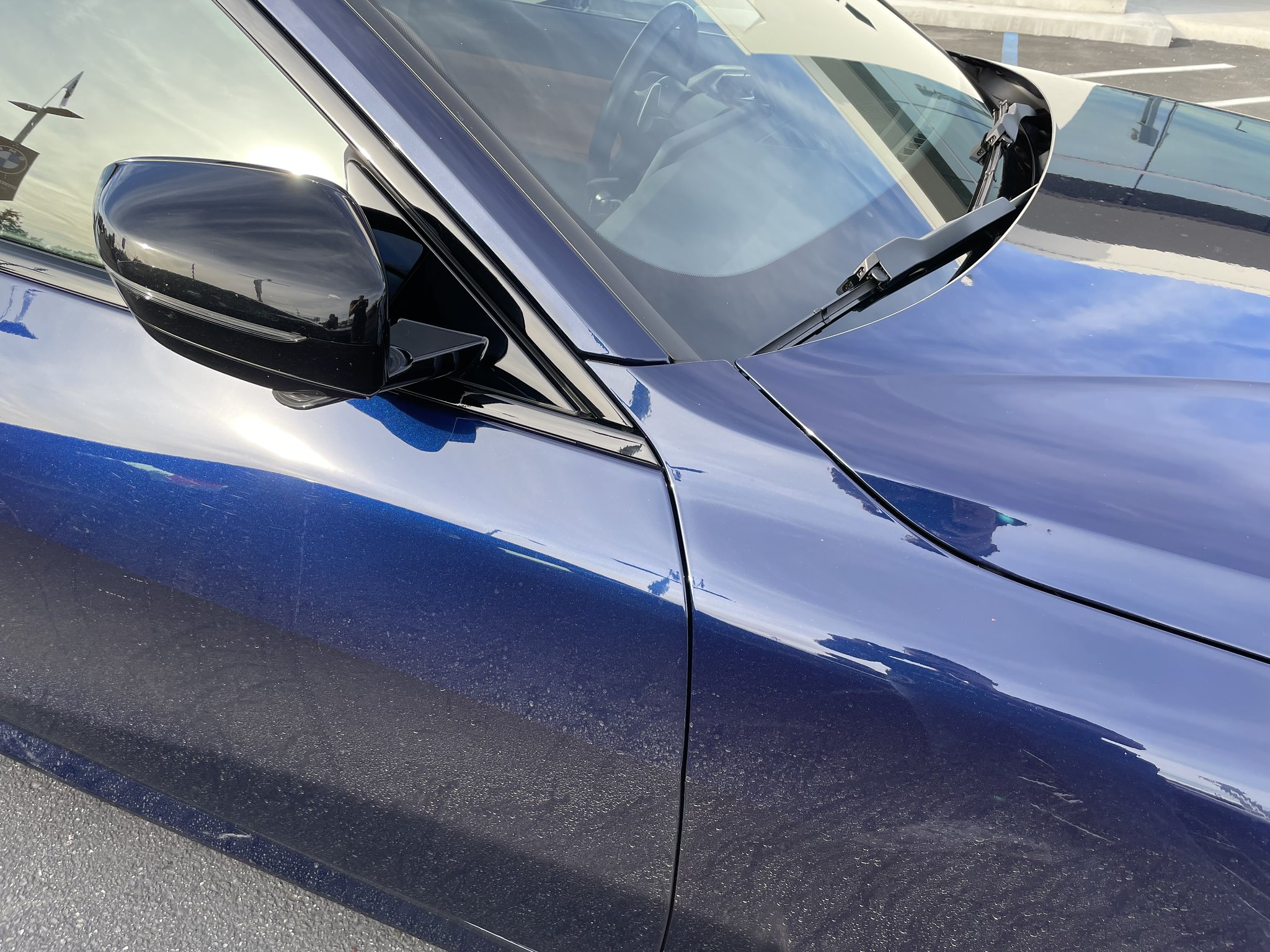 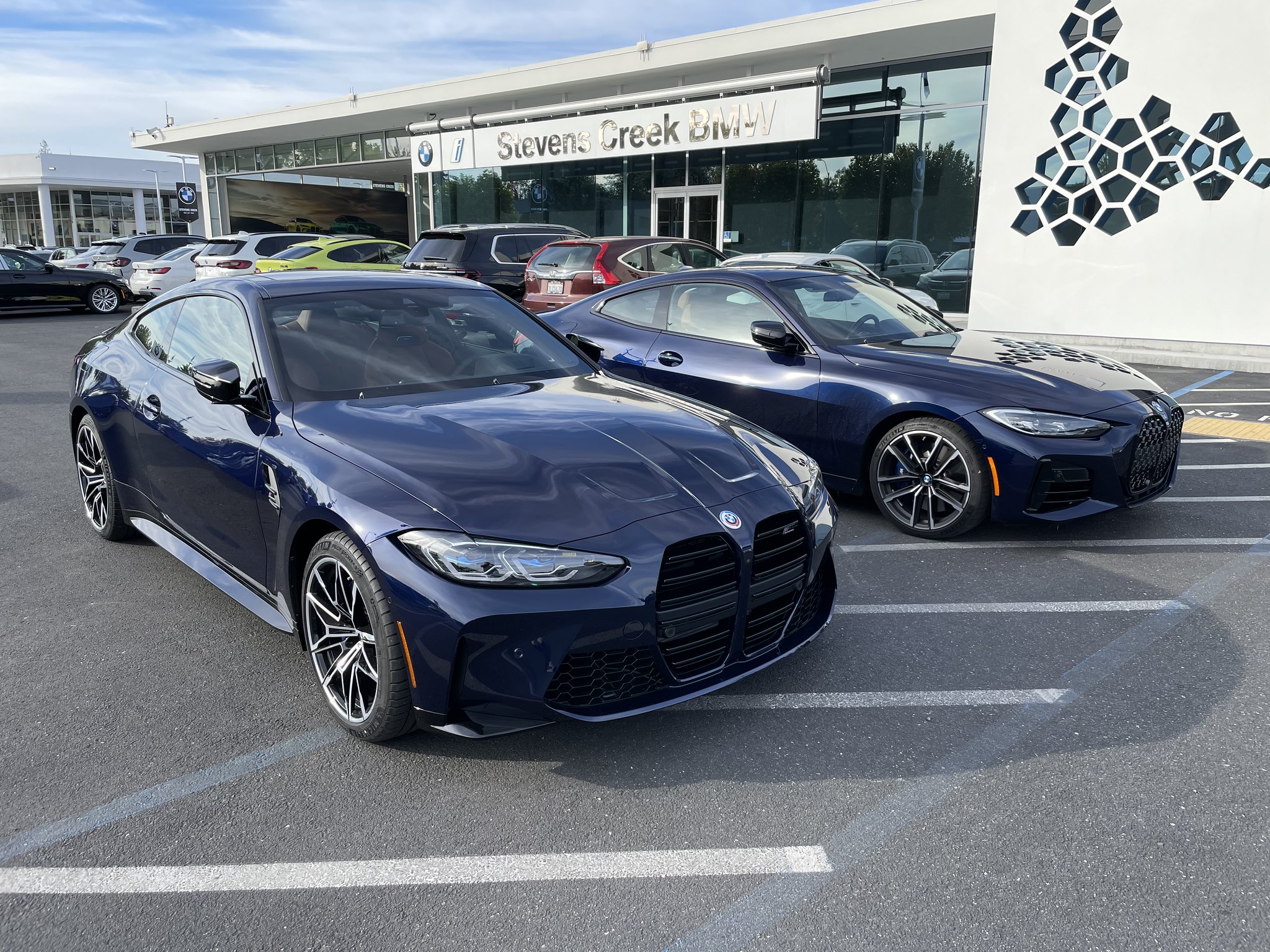 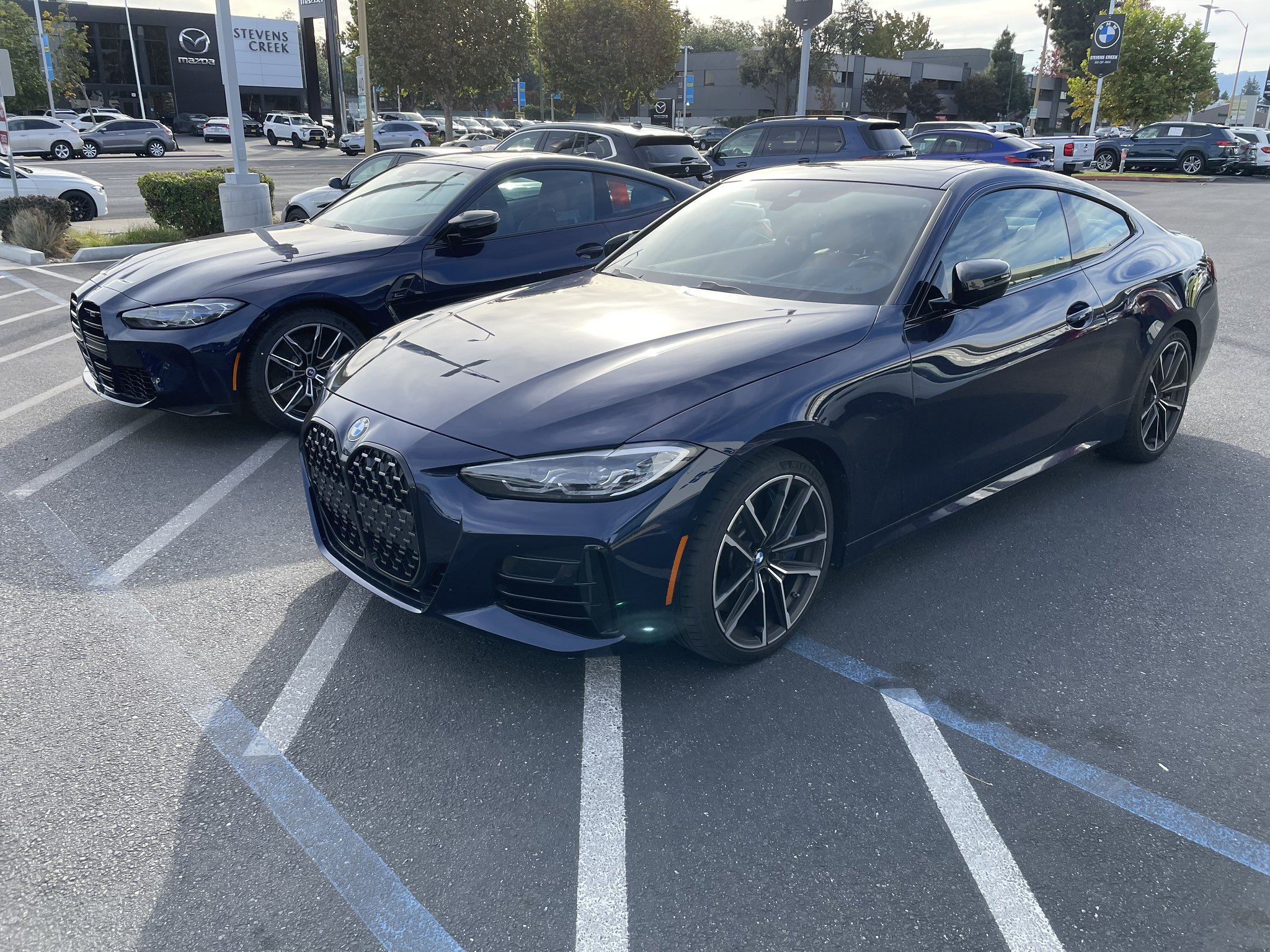 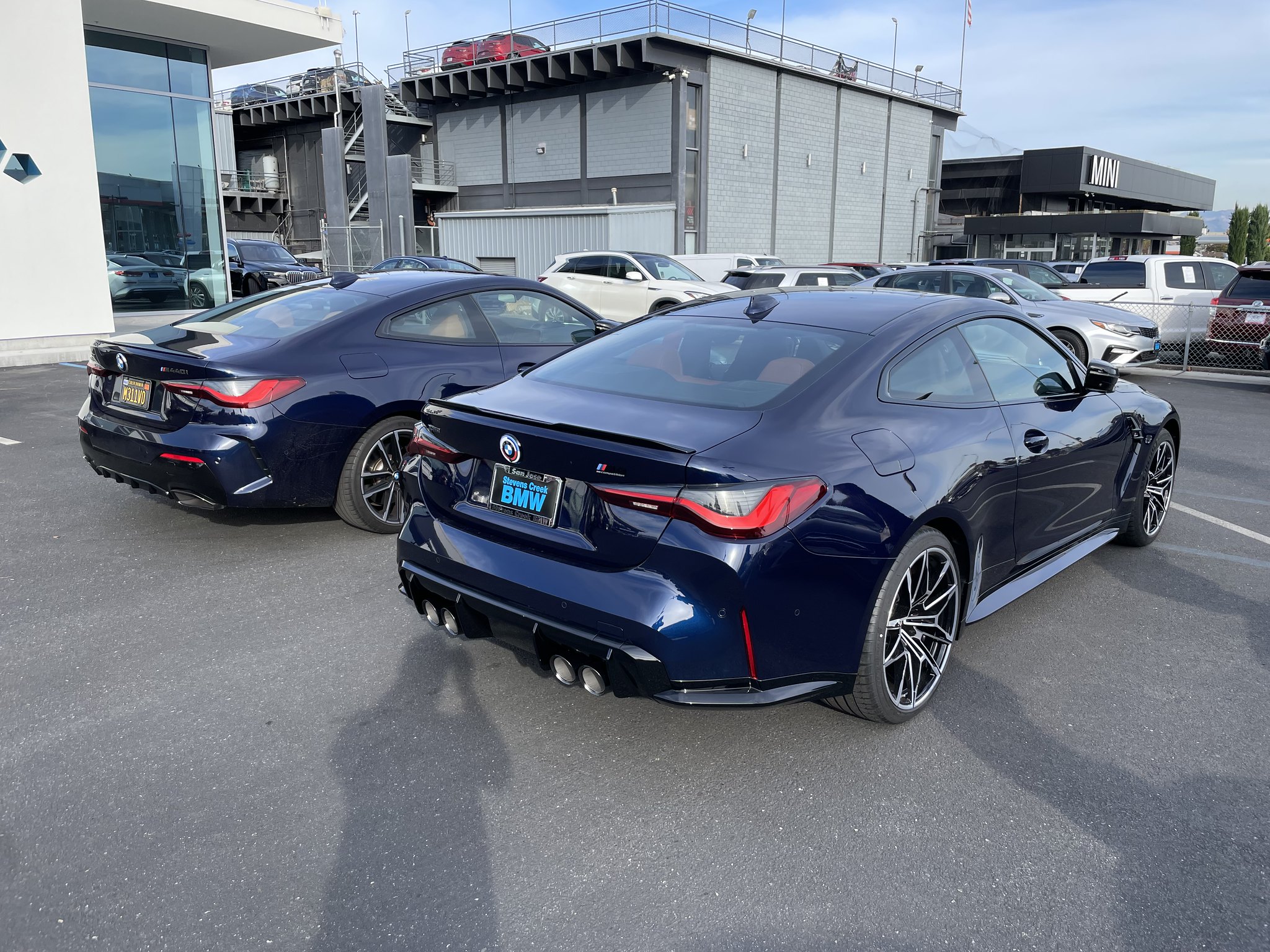 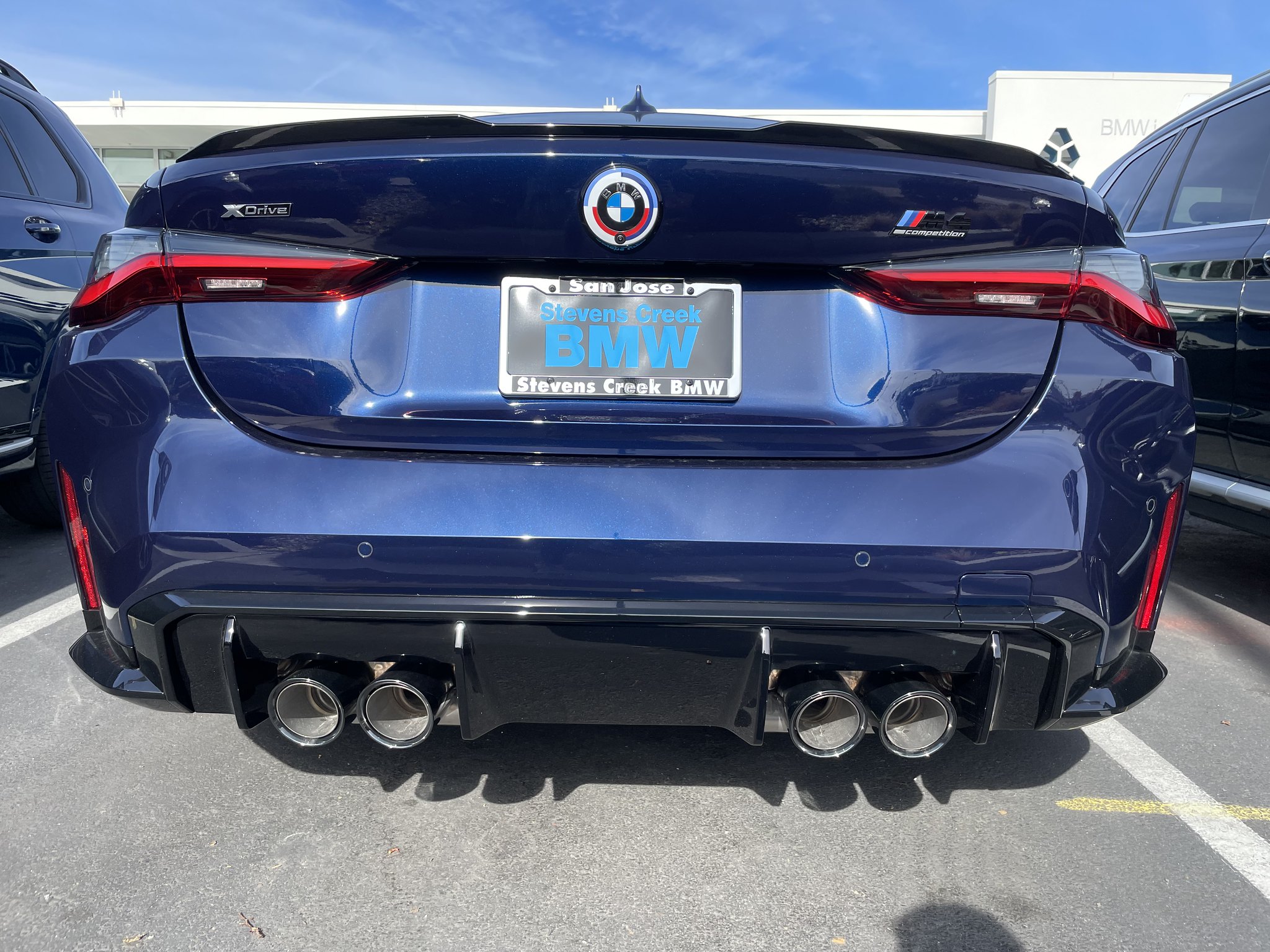 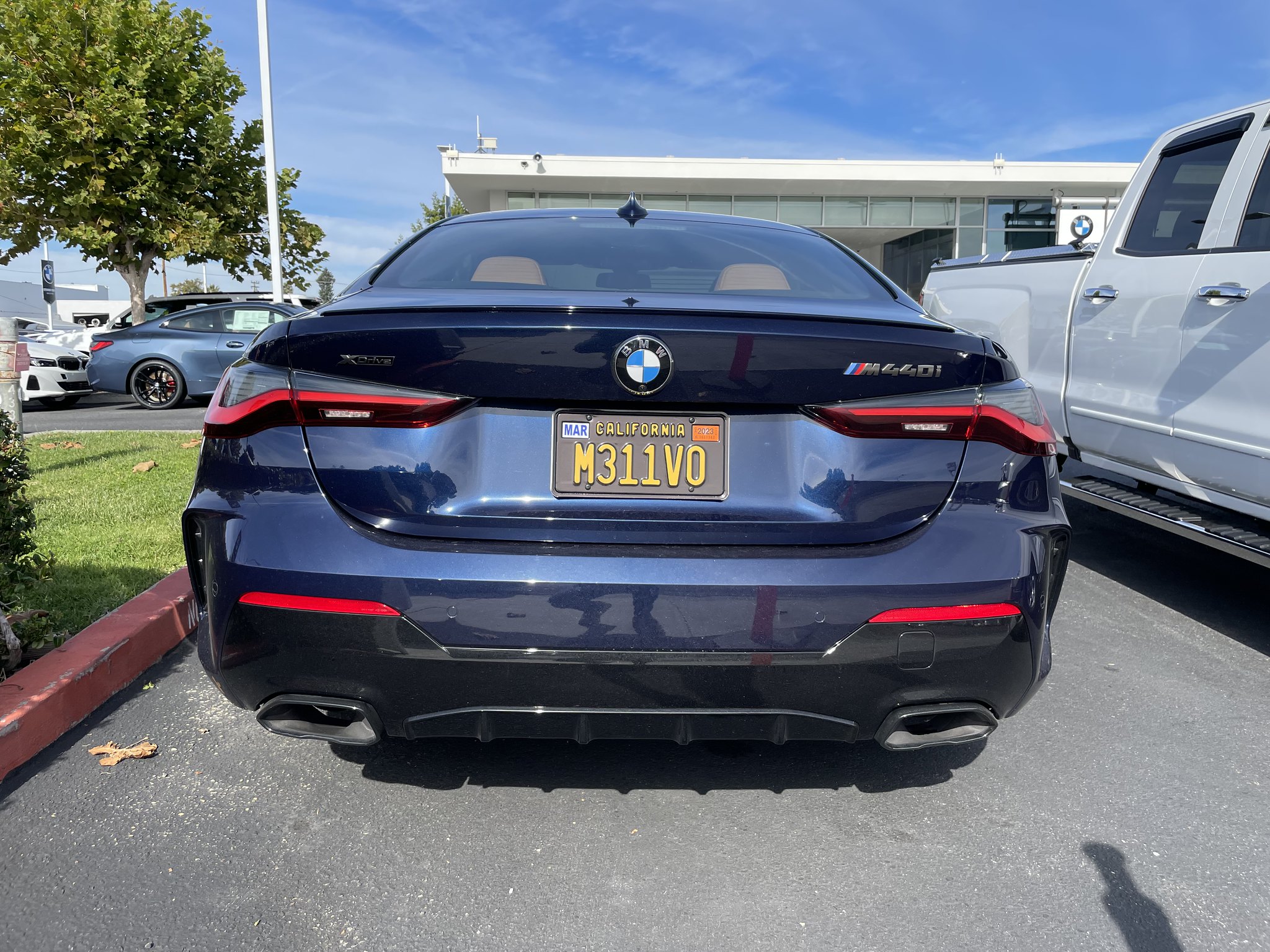 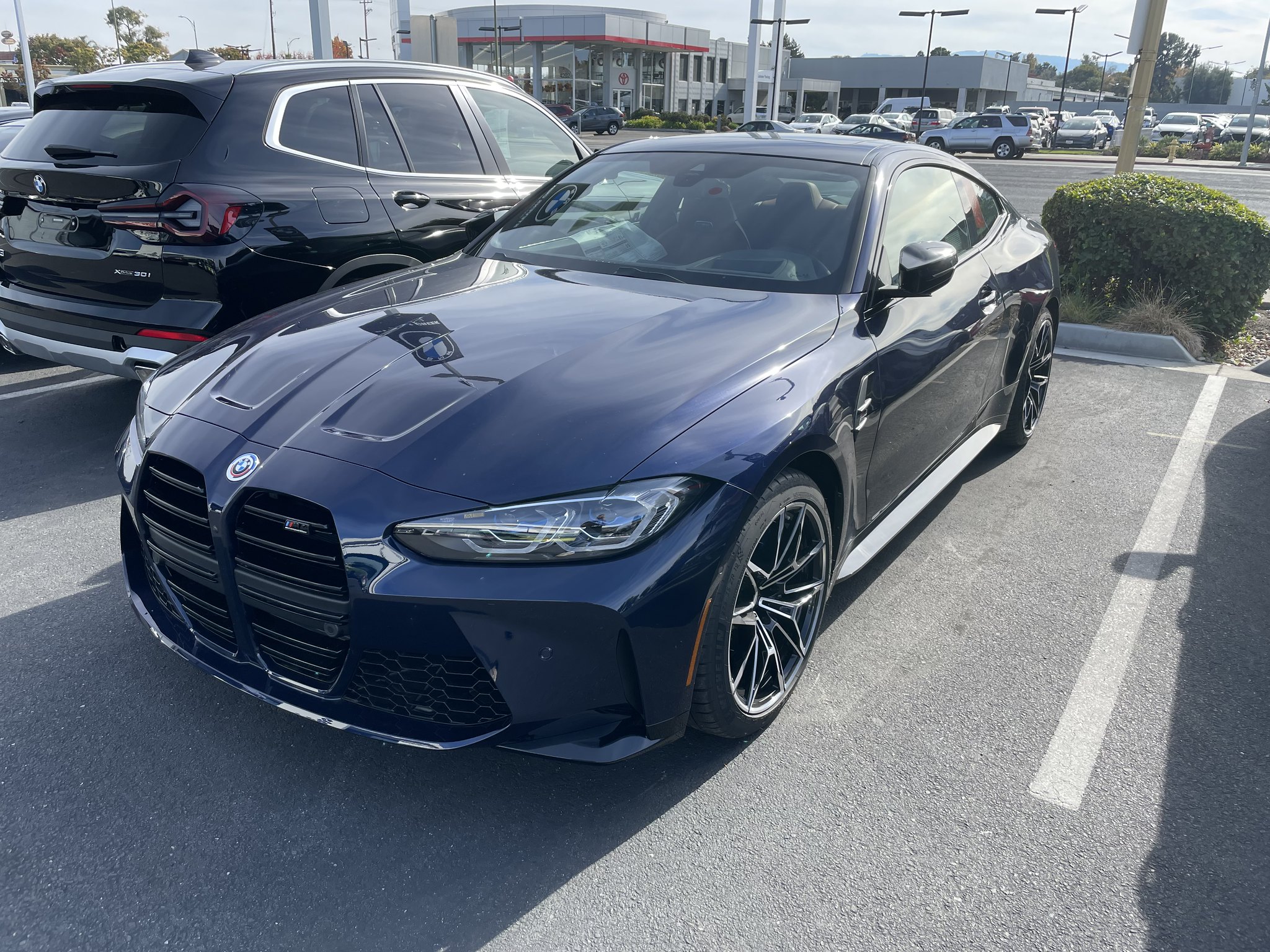 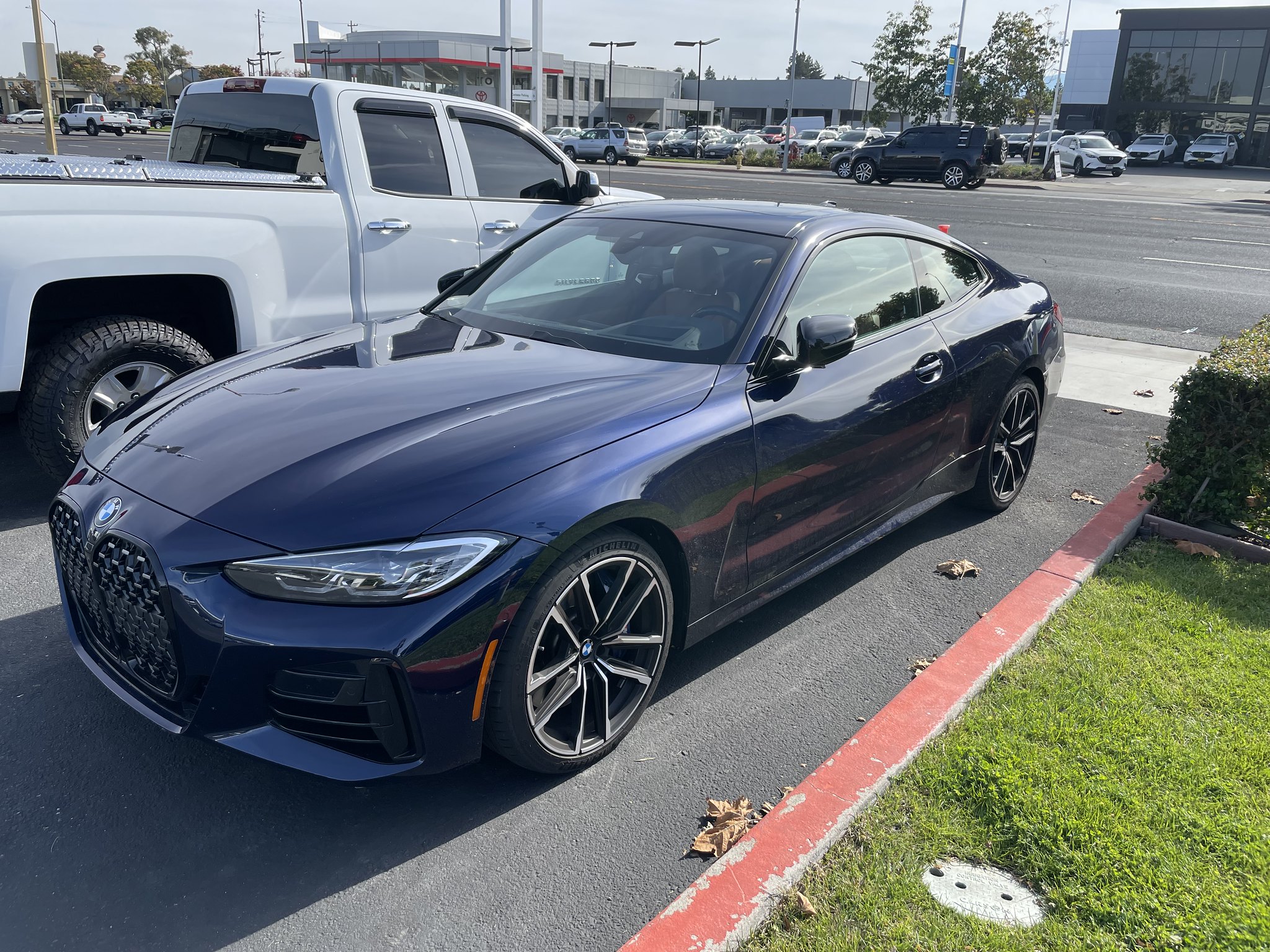 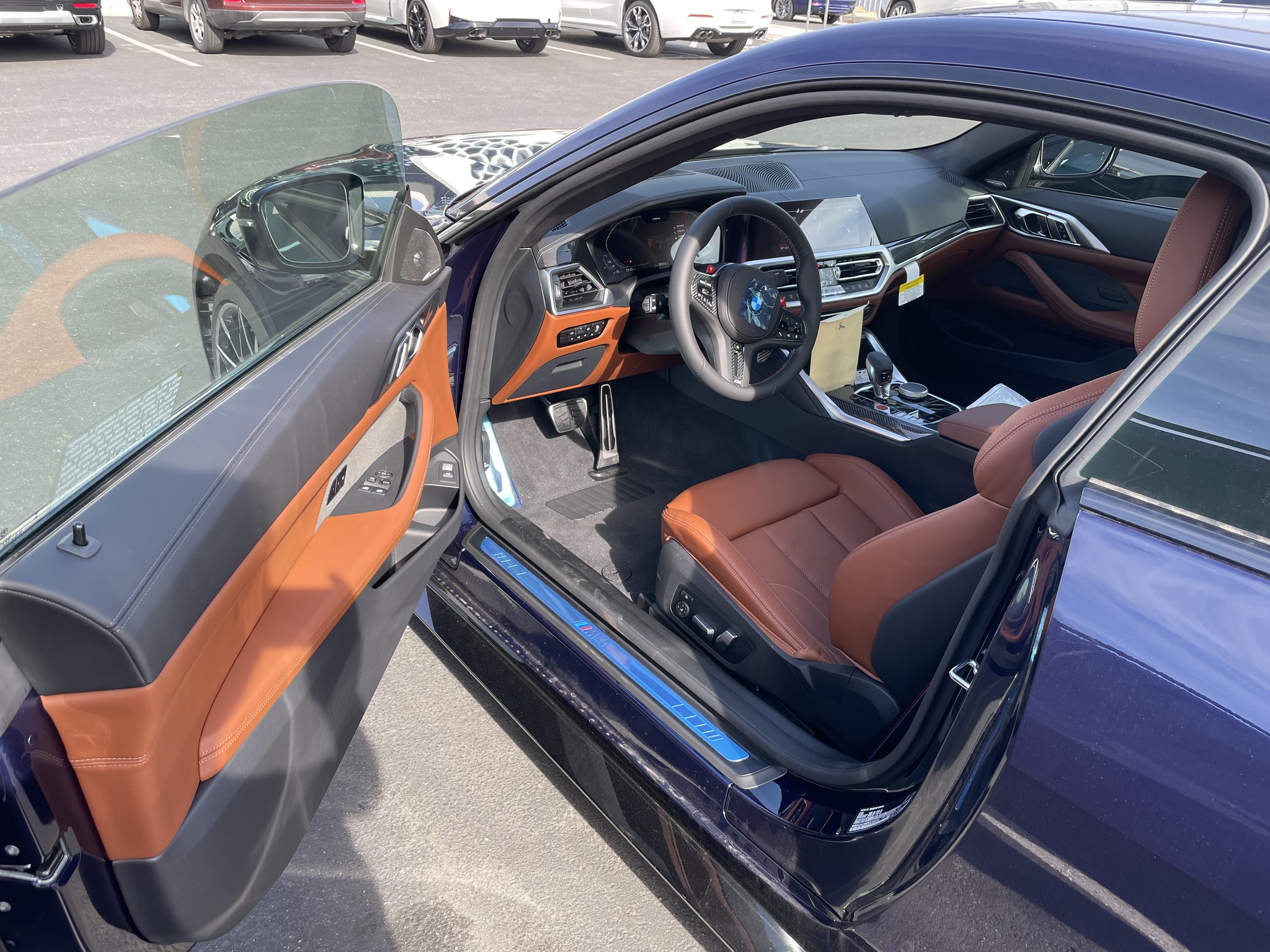 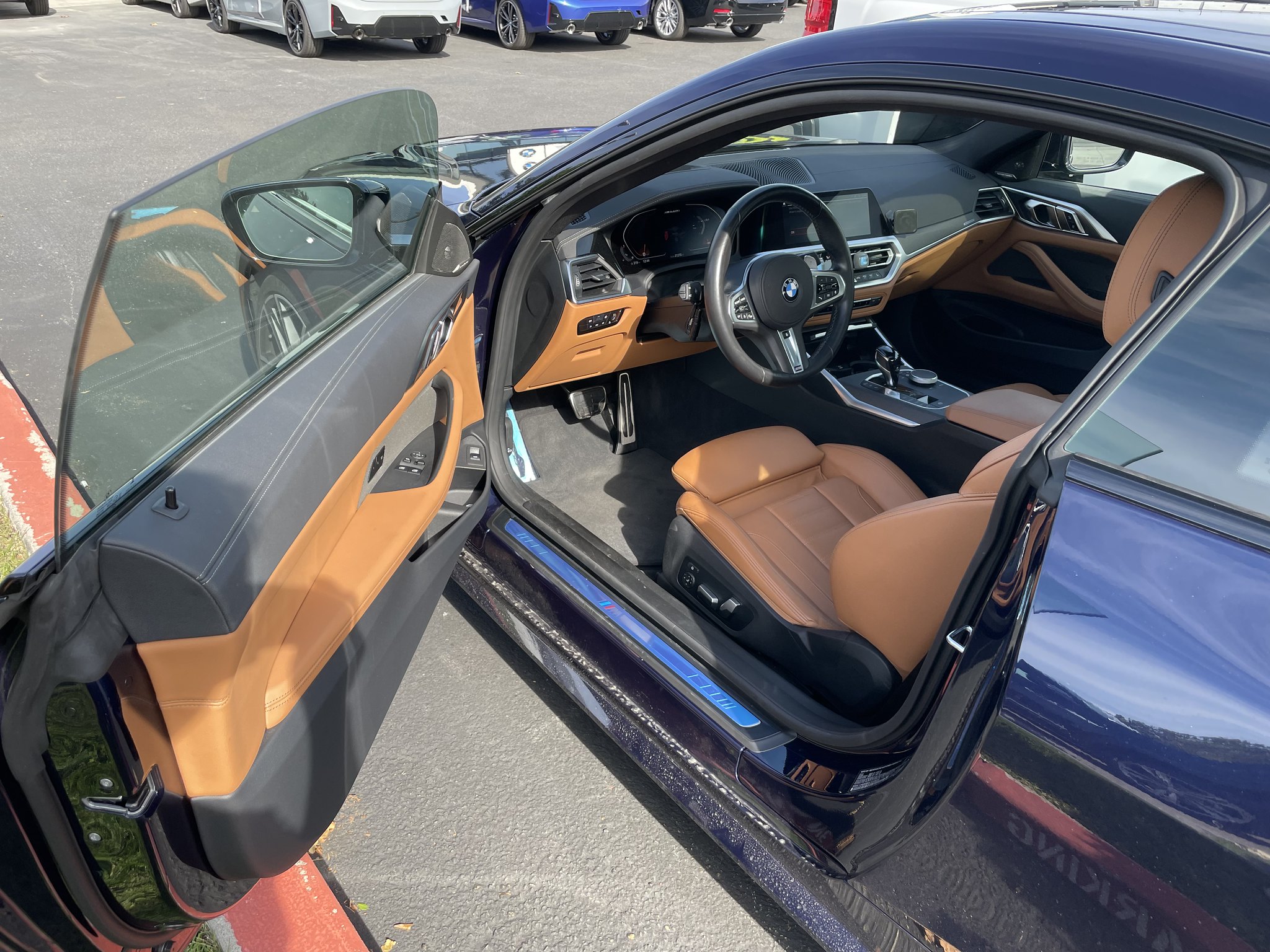 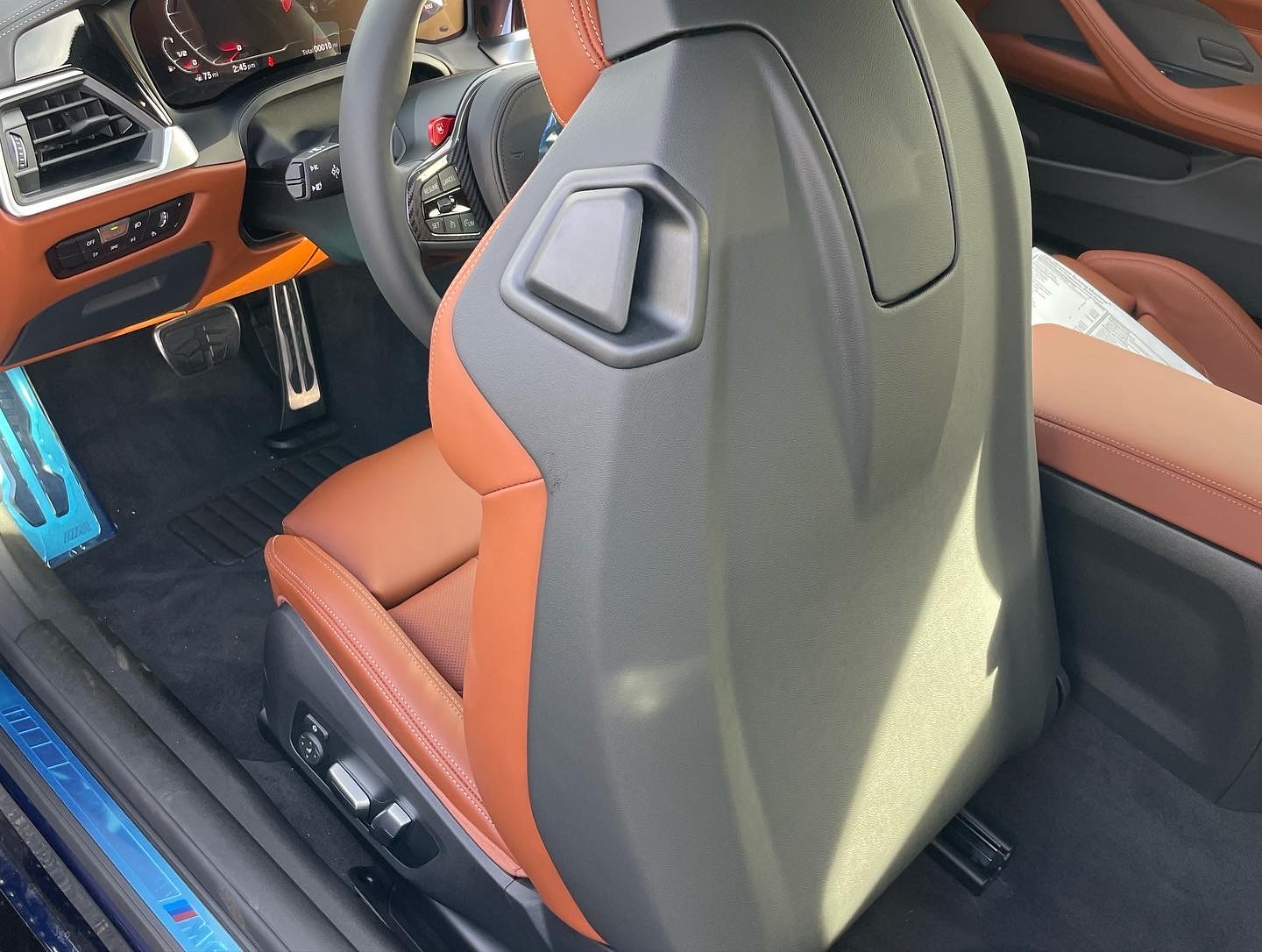 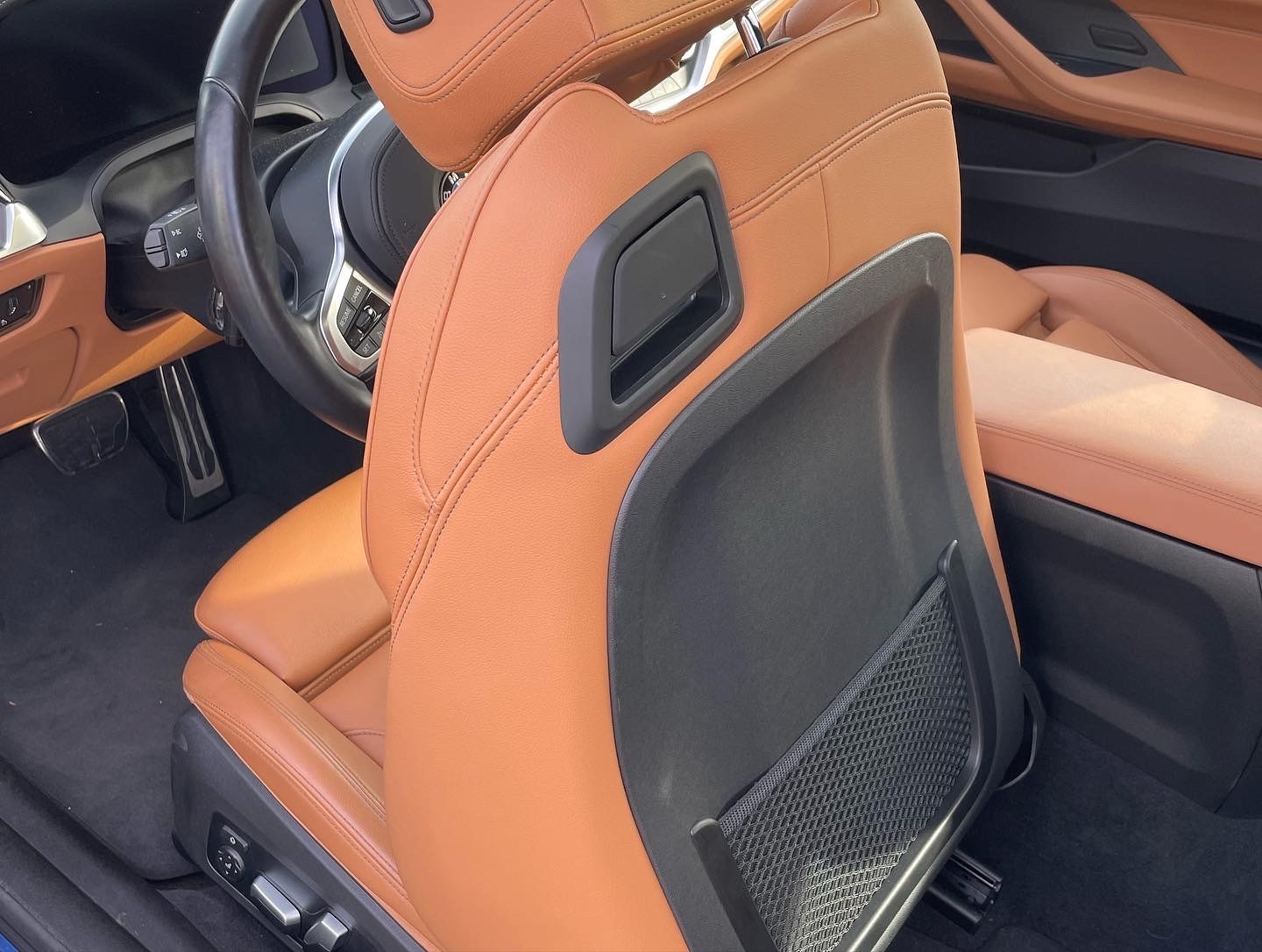 I promptly left him at the Silicon Valley Garage for a frontal PPF, and they were able to squeeze me in that same day (Friday) and finished by mid-afternoon on Saturday. My car was in good company: 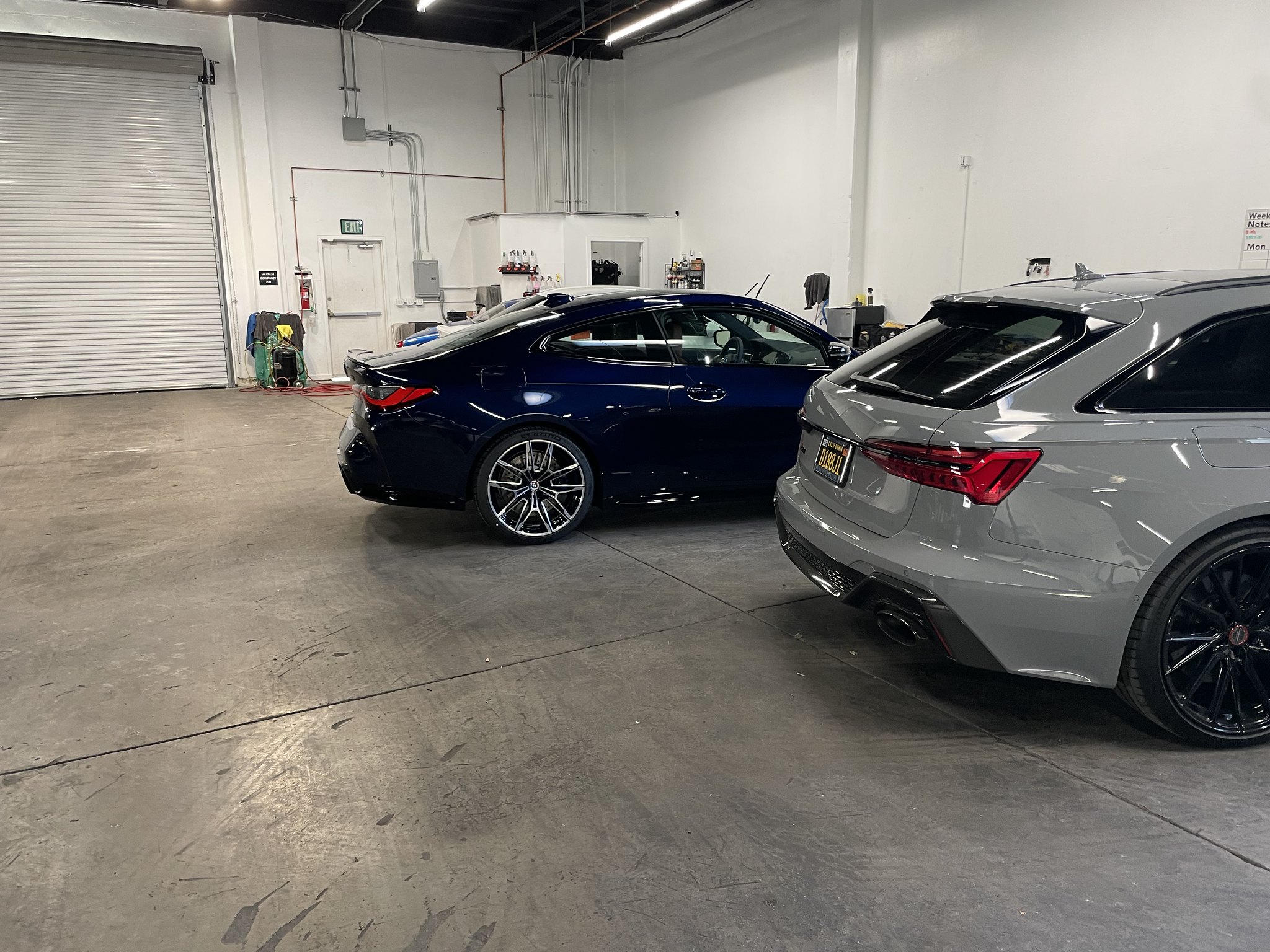 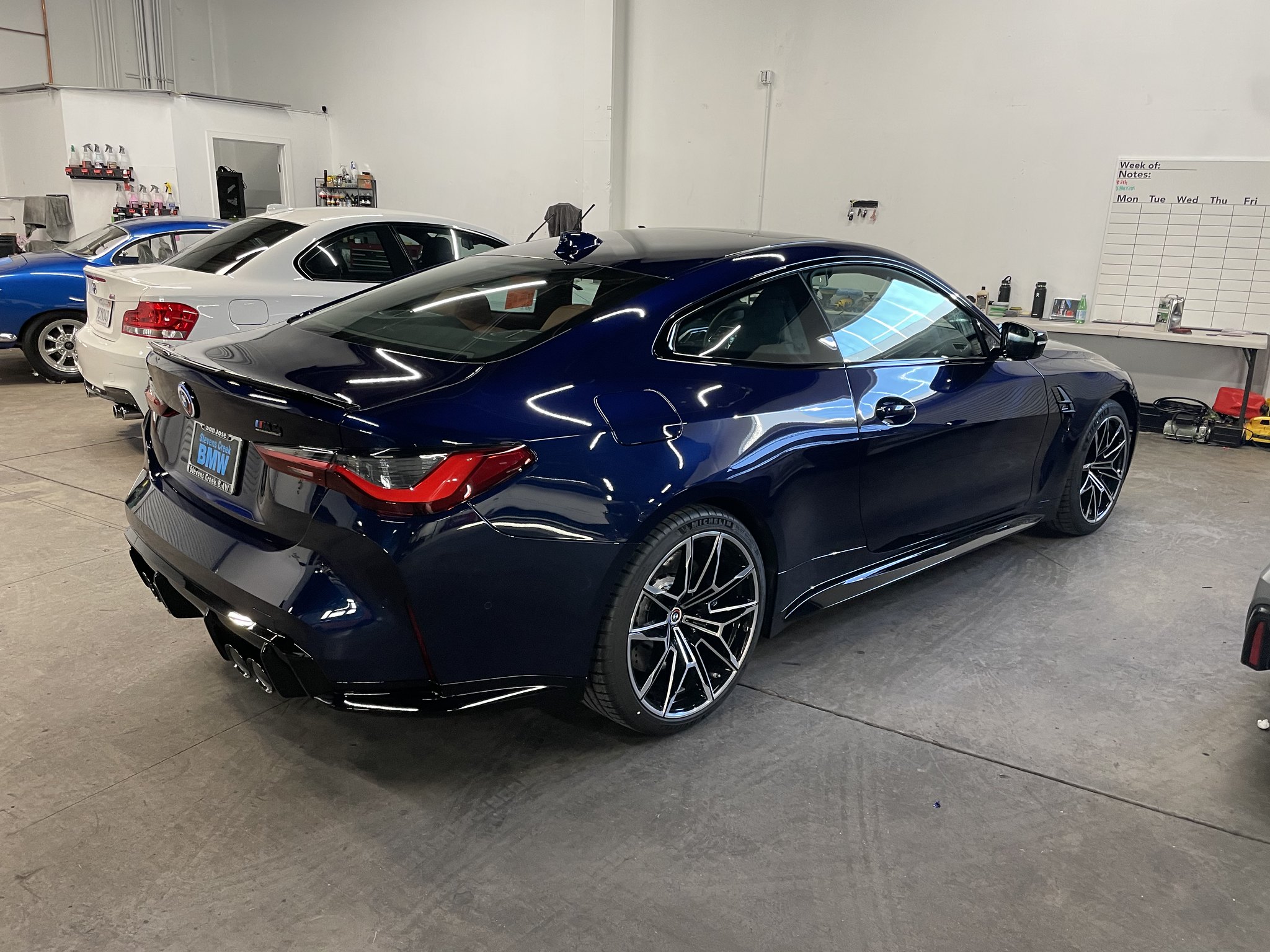 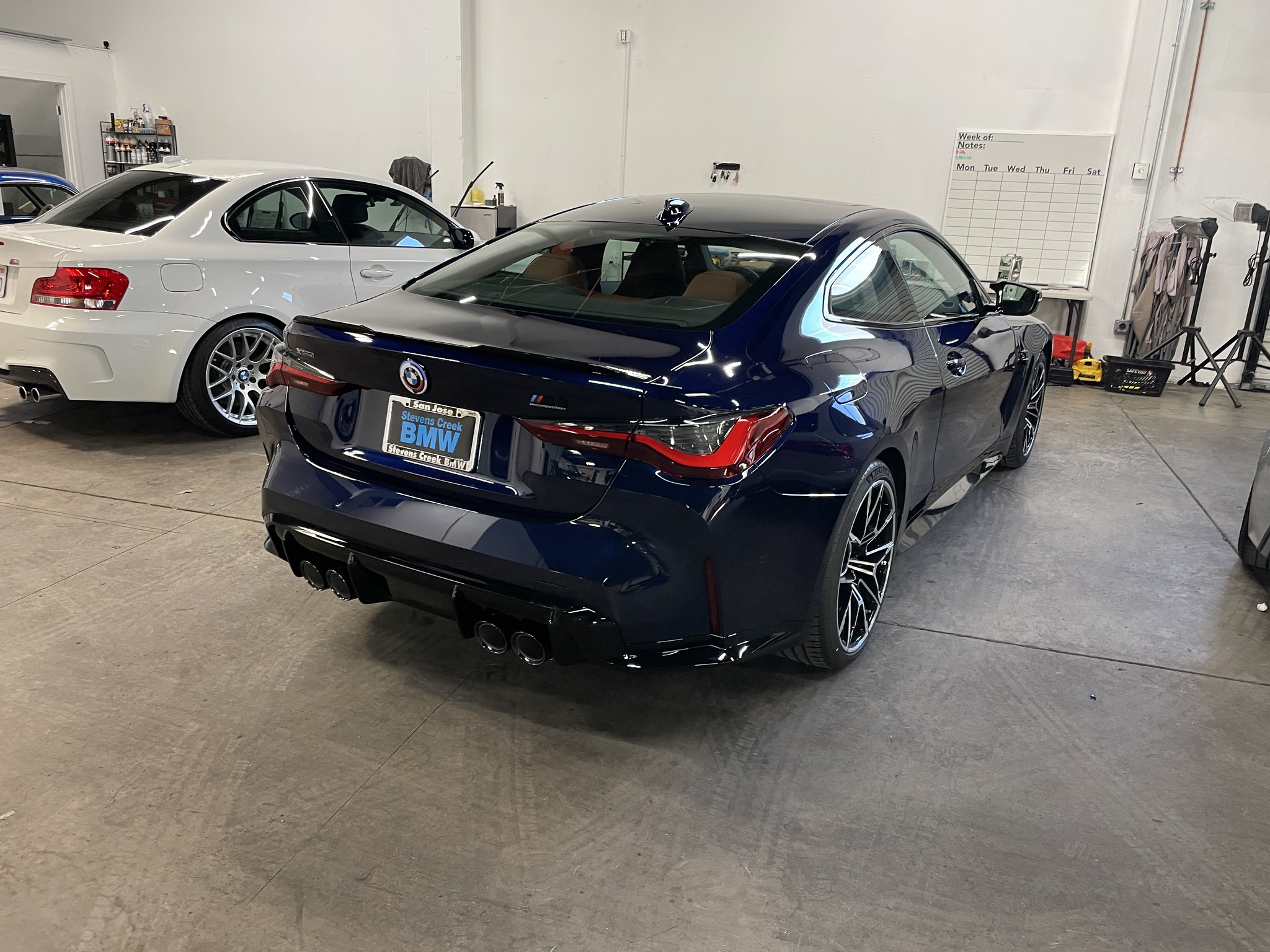 To notes after the first week of ownership:

1. The front seats are bigger. Slightly less space for passengers. Footroom, too—the bottoms basically touch the floor/holes when fully descended, while the M440 still has a little headroom.

2. The seat handles are in a comfortable position for much better access to the back seat. But, between the seats being larger and the document nets/random items in the back being removed, there is generally less room/point to get anyone back in there.

3. You feel the road more, for better and for worse. Not painful or anything but noticeable.

4. I keep accidentally shifting into first gear manual. The M440 is linear up/down for reverse/parking. The M4 is a sideways zigzag, and it doesn’t automatically shift into park when turned off. M440 did. Get used to it, but kinda impressed with the M440’s shifter and center console controls more. Although I prefer the M4 transmission itself.

6. Even in Comfortable/Efficient mode, you feel the engine braking a lot more than the M440.

7. Navigating the age of 80+ is easy but the boy is a thirsty beast. This “mild hybrid” system in the M440 is incredible and I have a new appreciation for it now that it’s out. That’s like getting back to driving my Durango or Ram 1500 with the 5.7 HEMI V8. Gotta do 70-75 for any decent fuel economy.

8. The flashy buttons on the center console are not only magnets for fingerprints but they look less raised/less distinguishing between each button. They blend together more which makes things more difficult to do by feel. The M440’s matte ones felt better. Crisper too, it looks a lot softer if that makes sense.

9. No cup holders in the rear center fold down/pass through tunnel. Didn’t use it anyway. He might ride a gun safe there instead. I do not know.

10. Damn, I’m getting a little more obsessed with carbon fiber now. Looking back, the glossy black spoiler and diffuser don’t quite strike right.

11. Braking! There is a difference in braking feel. It’s subtle, but noticeable to me. On the M440, it felt like the brakes would grab and lock—and continue to do so even if I start to backtrack a bit. I’ll see if I can describe this in words vs pantomime in person. If you were to brake at a value of 1 with your foot, you would feel the actual brake grip at maybe 1.2. If you were to then cruise while you’re decelerating, say down to 0.8, you’d still feel the brakes going down to 0.9. This made it difficult to stop or adjust smoothly, though it works very well for spirited driving in turns and such when you’re on one pedal or the other. By contrast, in the M4, if I apply one pressure with my feet, I feel the car braking by only 0.9. Several times this has caused me to crash to 1.5 for a 1.2 braking, and hot to red lights at offramps from the highway. I imagine I’ll adjust where feeling doesn’t matter, but I’m currently noticing.

12. Driving at low speeds. M440 just… gliding. seamless. The M4 feels like driving a supercharged car – you feel the engine dragging (I know that’s not the best way I can describe it at the moment) and you hear a slight whine as it tells you to goooooooo.

I swore I wasn’t going to be adjusting it anytime soon, but I’ve already received some offers for care items and I’m feeling very tempted. Although I will at least wait until after the break is over.

EDIT: Oh, and as it is, I created a new IG account just for my car. Lord save it I’m still getting feedback on posts/reels/filters but I’m going to steadily step up my game so for any gurus/experts out there any tips and tricks/resources for learning how to create solid content would be greatly appreciated.